Your efforts will not be forgotten

I can not stop thinking about him.
Great man and a real Rabbi (The only one that I trusted).
He will always be remembered by me for his love, patience, kindness, sacrifice and generosity.
He was always there for me helping to get my life straight.
By all means ( buying my undergrad books (now 3rd year medical student), bringing food when I was sick to going out playing pool to cheer me up and talking about life.
Will always remember
His laugh, jokes, hugs and kisses.
As I write this tears are running down my face there is so much to say.
I will miss you
Your efforts will not be forgotten.
And I will keep my promise !
Posted by remembering levi at 4:07 AM 48 comments:

Rabbi Levi Deitsch. Where could a person begin?

…Just about 20 years ago, one Friday afternoon before Shabbat, I heard the bell of my office door ring and on the other side were two Frum young men, holding a Talit bag and asking my father, brother and me if we would like to partake in the mitzvah of putting on Teffilin. Obviously, I welcomed them in and that was where the start of our beautiful 20 year relationship began. I witnessed him grown from a special young man to a community leader who was beyond his years in wisdom. His teachings were always filled with knowledge and the pearls of Torah which he bestowed upon his listeners, were always rich in depth and meaning.

On one particular occasion, I remember Rav Levi visiting me at work and announcing that he was engaged to the woman he hopes to spend the rest of his life with, (the fabulous Rebbenzin Miriam whom we all know so well). That day we had a memorable lechaim and his face was nothing short of glowing. He was clearly radiating a heavenly joy and he was beyond happy to finally start his life with this very special woman. Months later, Rav Levi approached me with Rebbenzin Mirriam, and mentioned he wanted to start a Shul in Virginia. At the time I had no idea that a young man of his age was capable of achieving precisely that and truly, so much more. Because of his charisma and inborn love of Hashem, it seemed as if he could do truly anything. He called me and confidently proclaimed “We did it.” Albeit he was proud (and deservingly so,) his strength in being an anav overcame his desire to boast this wonderful achievement.

Baruch Hashem, throughout the years I knew Rav Levi, we shared happiness in numerous other smachot as well; my son’s Bar Mitzvah, the earning of his Rabbanut, and the birth of his adorable children, in addition to many other milestones of his life.

Sadly, we also shared a common displeasure in many unfortunate moments. Throughout the ups and downs, Rav Levi still carried his famous smile on his face and approached all issues of life with a positive attitude. Even in his later days, where I was privileged to visit him at his mother’s home in Crown Heights, he welcomed me with that distinct smile that made him nothing short of legendary. Throughout our time together, his Emunah in Hashem, his love of humanity and his outstanding character, never faltered. It was precisely these virtues that carried him so long and helped him overcome all of the obstacles throughout his 34 year journey in this world.

Not too many people could achieve what Rav Levi did in such a short amount of time. Rav Levi will forever live in our memories and hearts as a unique person with unmatchable courage and love. Personally, I am forever grateful for the way Rav Levi touched my soul, and for having taught me to better embrace the Torah and thus become a greater citizen of Hashem’s world.

Rabbi, we will never forget you.
Posted by remembering levi at 4:13 AM 39 comments:

Rabbi Levi giving the speech at the Hebrew School graduation, where 50 children graduated between 5-13. 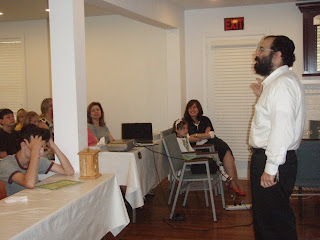 Levi giving a L'chaim to a newly engaged couple, who had their engagement party at the Chabad house. 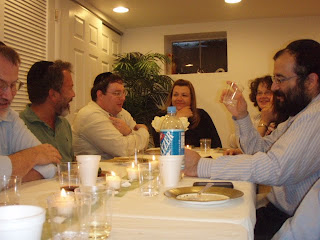 Posted by remembering levi at 4:50 AM 46 comments:

He was a larger than life

“Rabbi Levi” as he was fondly called, was sent to Tyson's Corner, VA to save lives, spiritually primarily, but in his final moments and then beyond, an actual life.

In his last weeks, Rabbi Levi was in massive pain, his illness rapidly becoming too difficult for his doctors to treat. An energy healer was flown in from Israel, one who they hoped would provide Rabbi Levi with some relief.

Taking a walk that fateful Shabbat afternoon, the Healer began to experience chest pains. Mentioning this to Dr. I, he was told to stay in town until Monday when he could have it checked out by Dr. B right there at Reston Hospital.

Monday morning came, and as he was staying at our home, I drove him to his appointment. Figuring I’d go and say a quick hello to Dr. B. I accompanied him instead of driving to the office. It was a good thing I did, as the receptionist said he had no appointment. Reluctant to stay until the afternoon only to get a consultation, as the receptionist suggested, he says to me “Let’s go, I have friends in Baltimore, and then some things to do in NY, I’ll take care of it some other time”.

Leaving the office, I glanced at the wall where the names of the doctors whose practice it was are prominently emblazed; I recognized one of them as a student at our current JLI course on Medical Ethics. Calling Dr. Y. on his cell phone he graciously agreed to have him squeezed in immediately.
Not a moment too soon.

The next morning he was being wheeled into Inova Fairfax for an emergency angioplasty. His results? The opening of his coronary artery that had become 95% blocked. He was, in the doctors’ words, “a heart attack in waiting”.

You see, he came to save Rabbi Levi’s life; it was Rabbi Levi who saved his.

Rabbi Levi will be sorely missed. He was a larger than life figure; his presence filled any room he was in. His absence now leaves a gaping hole in our collective heart.

Yet in Beit Shemesh in the land of Israel, a grateful father, husband, and grandfather feels his presence still. So does his family.

Please share your memories and pictures by using this form or by emailing rememberinglevi@gmail.com

This blog is dedicated to the memory of Rabbi Levi Deitsch, the Rebbe’s Shliach to Tysons Corner, Virginia, who tragically passed away at the age of thirty four on Shabbos afternoon parshas Vayeitze, after a long illness. He is survived by his wife and four children.
יהא זכרו ברוך.
[picture credit: my shtub]